Having designed, supplied and installed a number of bathrooms as of late that we are exceptionally proud of we decided to have a bit of fun with this week’s bathroom blog and uncover how the other half bathe. For some, there’s something about getting the inside scope on how celebrities differ from us mere mortals that, over the last decade or so, has made the media industry millions.

Now although we’re not avid fans of being consumed with how other people live their lives we are truly besotted with extravagant bathroom designs, and where better to look then the homes of the rich and famous?

Having spent some time scouring the internet we have sort listed our top 5 celebrity bathrooms in an attempt to showcase to our readers the most luxuriously excessive, nauseatingly repulsive and damn right over the top bathroom set ups that money can clearly buy.

Located in Southington, Ohio, the heavy-weight champion’s home, which has been left derelict since 1999, is home to one of the worst bathrooms we think we may have ever seen.

Huge in appearance the black marble, green stone and gold bathroom with mirrored ceiling is a real sight for sore eyes – we can only pray someone moves in and rips it out soon! 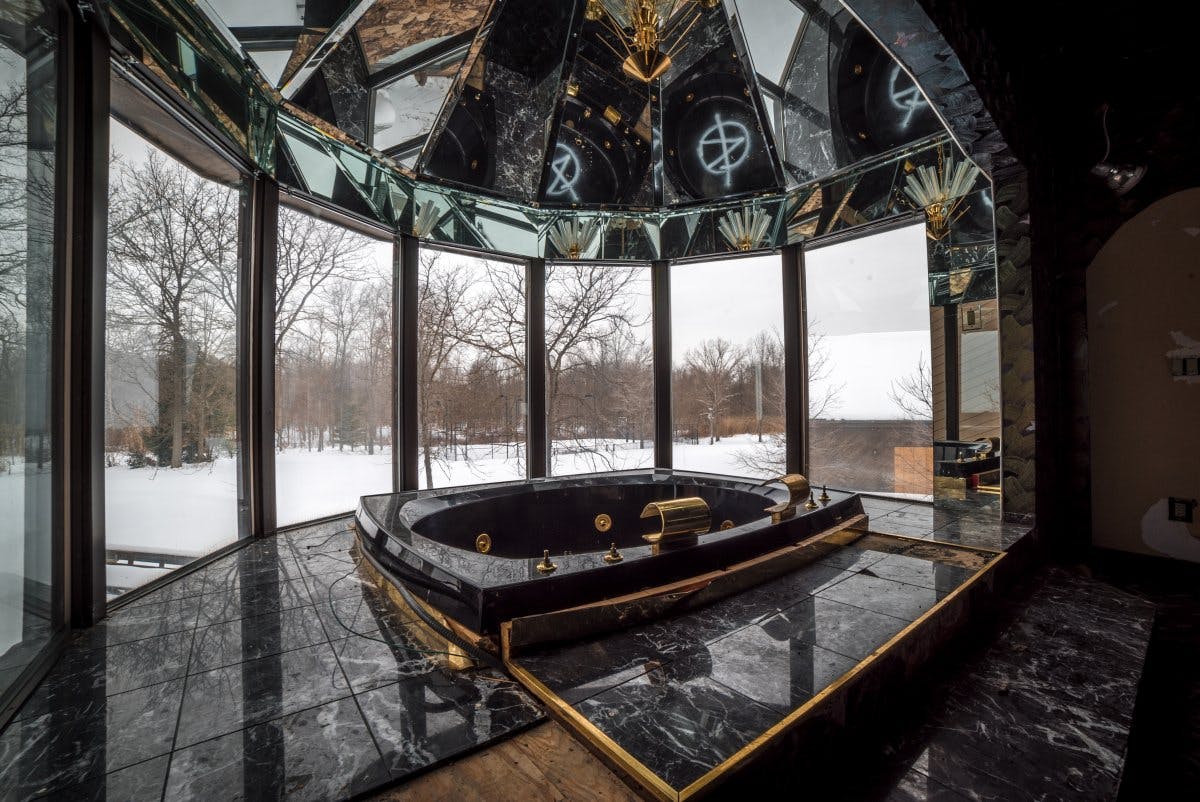 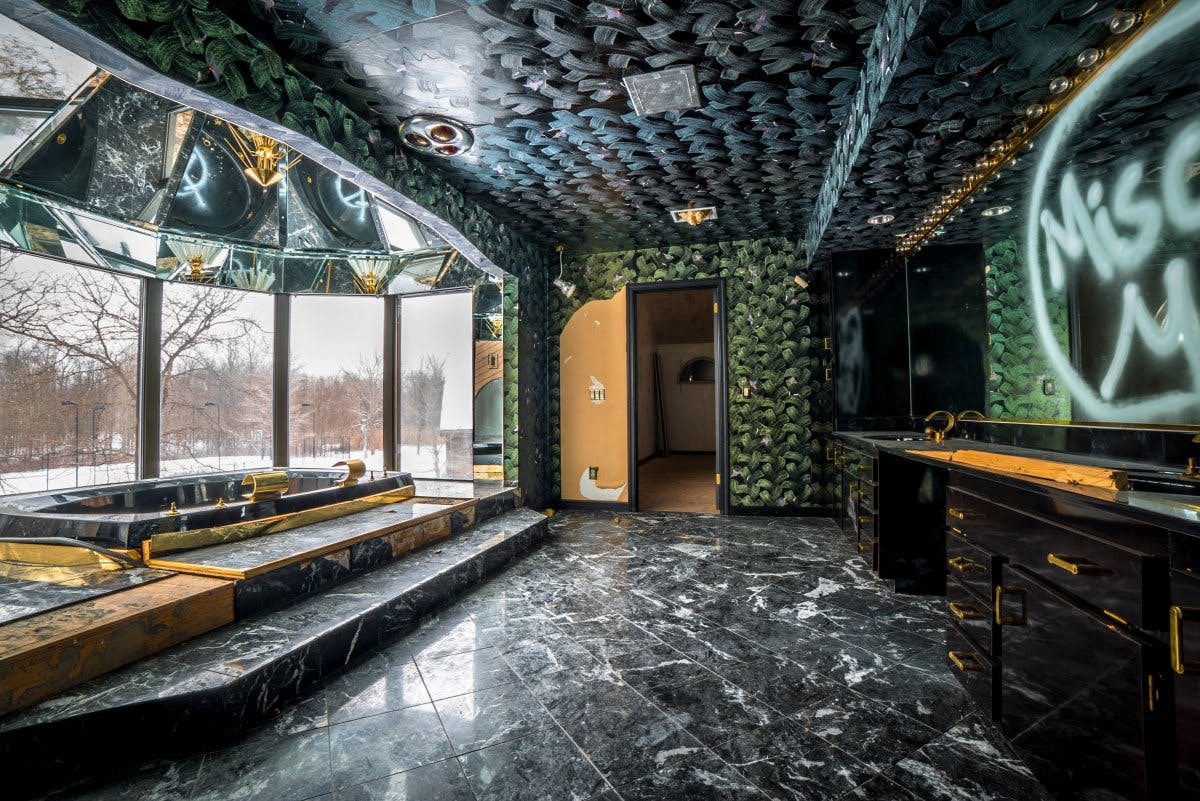 The world famous American actress come model occupied her New York penthouse with her husband in the late 50’s. However it wasn’t until recently that the property resurfaced on the market that we got a sneak peek into the décor of this 2 bed, 2 bathroom apartment.

On the market for a whopping $6.75M it is believed that the main bathroom is one of the only rooms to be preserved to Monroe’s personal tastes and to this day continues to consist of black Jacuzzi, marbled staircase and mirrored side wall.

Move in ready thanks to the luxury makeover it received, the penthouse has been interior designed to perfection and our favourite room (for obvious reasons) has to be the master bathroom.

Featuring floor to ceiling windows and glass doors the room is blessed with plenty of natural light and boosts a huge bath for soaking as well as a gigantic steam shower. 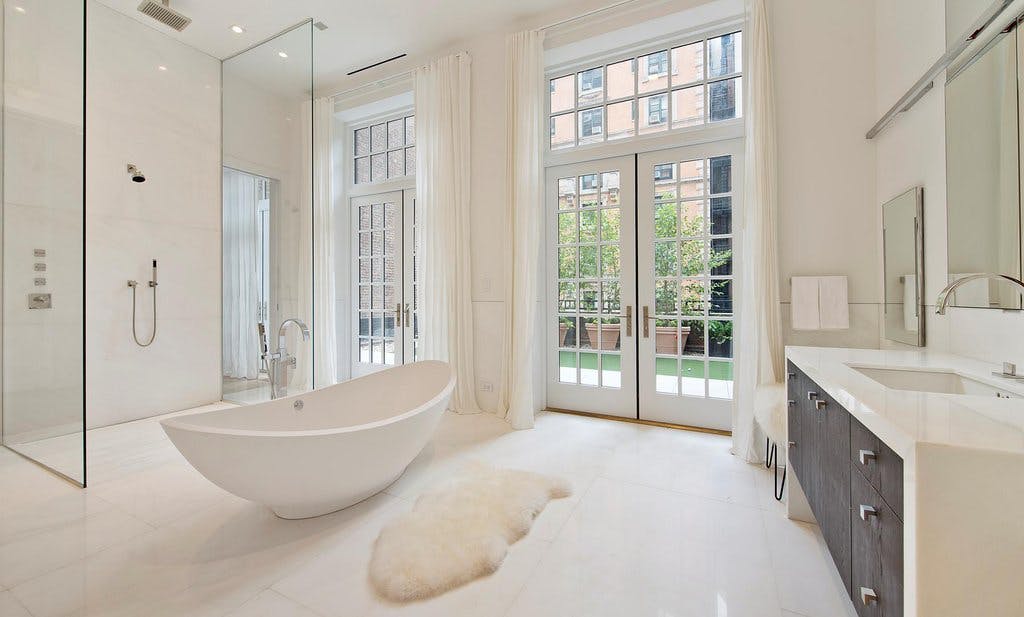 Hugely famous for playing Chandler Bing in the hit TV series Friends, we feel Matthew Perry’s Malibu mansions master bathroom deserves an award all of its own.

Styled contemporary with modern architecture the master bathroom (1 of 6 bathrooms on site) boosts panoramic views of the Pacific Ocean which we feel creates the ultimate relaxing retreat. 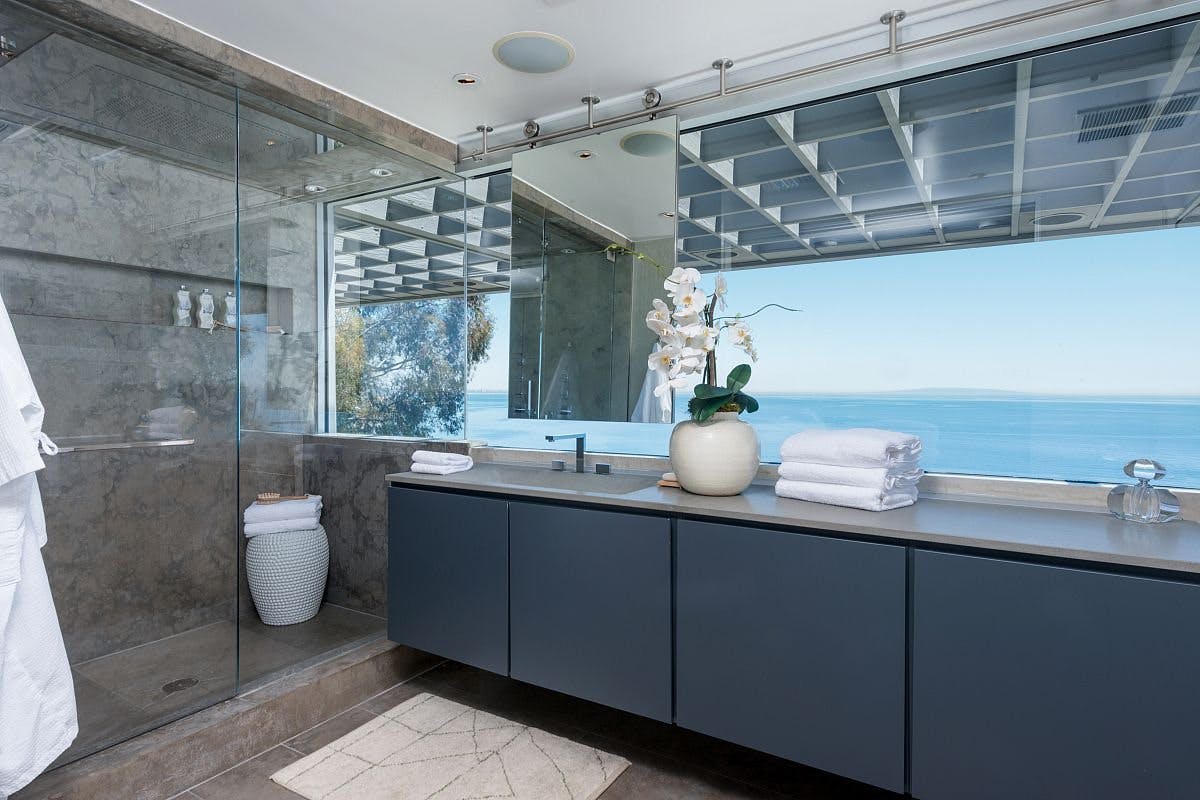 What celebrity bathroom series would be complete without mentioning this fame hungry bunch? Having been splashed all over every media channel possible for the last couple of years it’s highly likely that some of us will have already caught a glimpse of the then martial home bathroom so we thought we’d treat you and tie 5 bathrooms into 1.

Leader of the clan, Kris’s California mansion, has occupied all 6 children and 4 grandchildren at some time or another so has of course been designed to be a family affair. Like most however Kris also needs her own down time and means of escapism and we feel her master en-bathroom has been created to achieve just that. 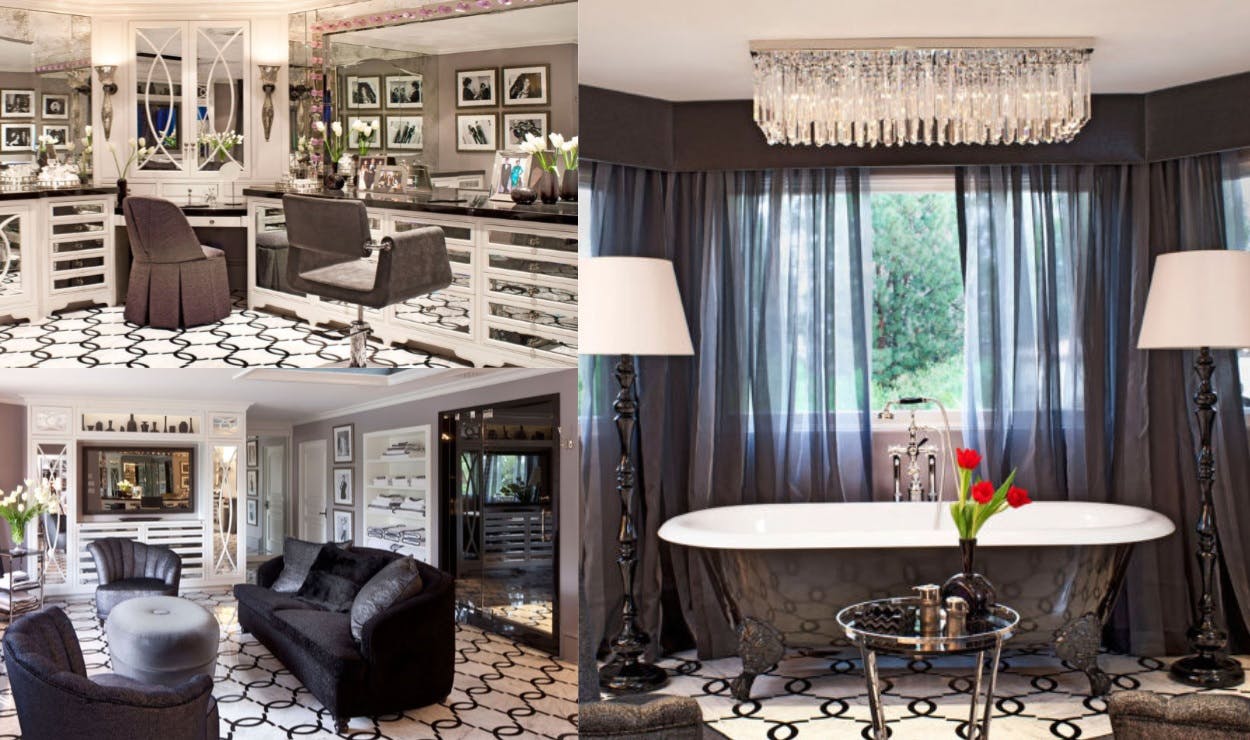 The youngest member of the family bought her own Calabasas mansion in early 2015 at the ripe old age of just 18. Aside from adding a number of personal, yet unique, touches to the complete renovation of the property she couldn’t help but take a bit of the family home with her…

Something the youngster has allegedly come to regret (we can’t imagine why…) she installed an exact replica of the famous ‘black bathroom’ from her Mum’s house into her own. 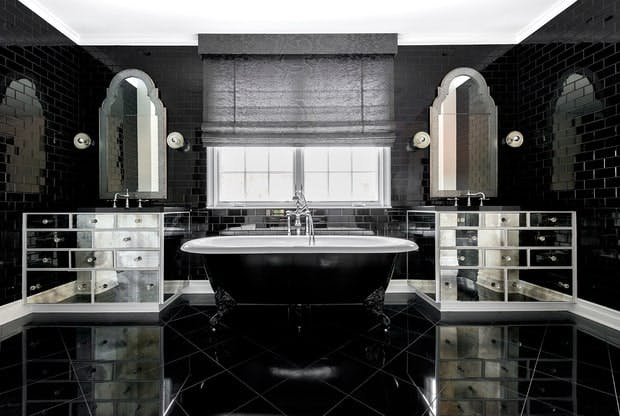 A Hollywood hills mansion fit for a King. Kendall has made no secret of the fact that she was never a fan of her younger sisters black bathroom suite so it came as no real surprise that when she resided in her own home the design she infused was quite literally the opposite. Described as a peaceful, snow white retreat with epic lighting we must admit that if we had to choose Kendall’s bathroom would be a firm favourite over Kylie’s. 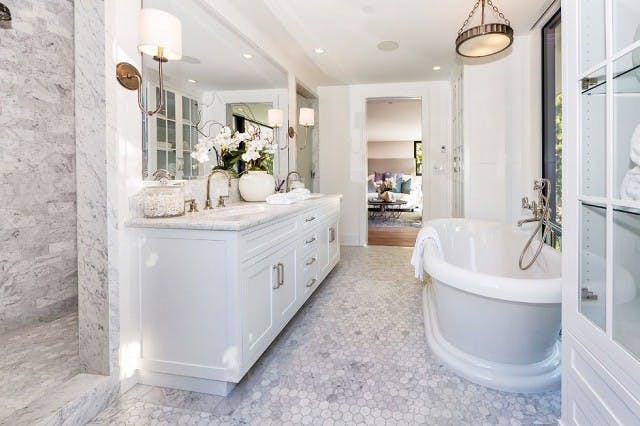 Having shared a bathroom with multiple siblings in her adolescent teens, Kourtney K now lives in her very own mansion that boosts an astonishingly unnecessary 9 bathrooms! A firm favourite amongst the entire clan, Kourtney’s master en-suite is truly awe inspiring suite thanks to its warm yet clean look and feel. 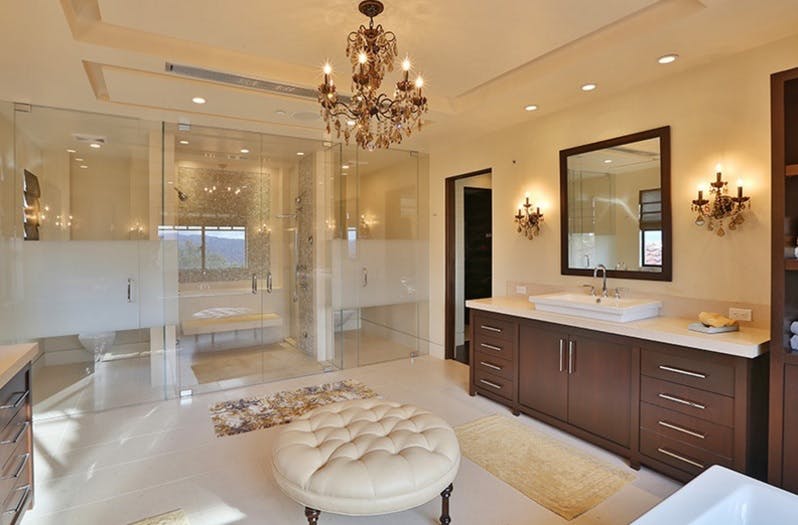 Perhaps the most famous member of the family, Kim’s martial home of her own has been openly described as a French provincial California estate infused with all the latest mod cons despite its country-style aesthetics.

For a family where image is everything is shouldn’t come as too much of a surprise when we tell you that Kim and Kanye’s property boost two identical master bathroom suites – one for him and one for her. Both bathrooms are marbled throughout and feature their own saunas, spas, steam showers and private patios. 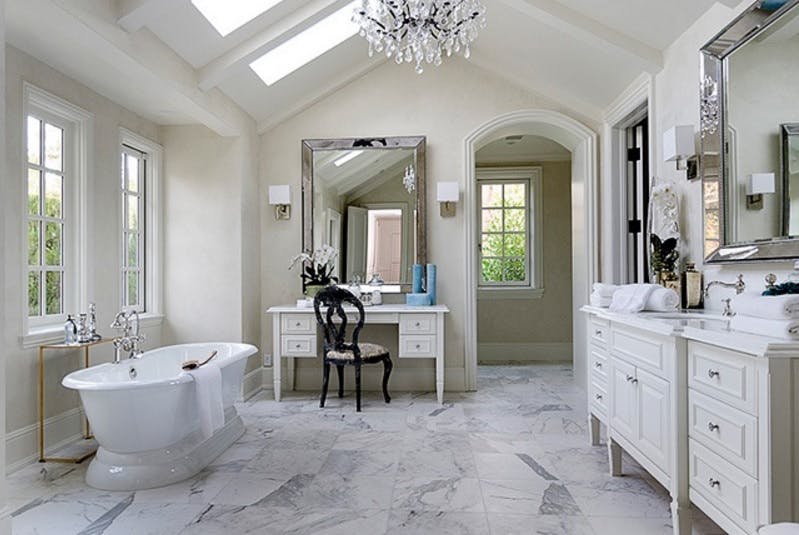 MoreBathrooms, part of the Passmore family, is a Leeds based bathrooms by design specialist. Whether you require a complete bathroom solution or a bathroom renovation MoreBathrooms offer bathroom design incorporating expert knowledge and advice in all themes, ranges and styles as part of their complete supply & installation service.