Mr and Mrs Cowling, and their daughter, lived in a 1950’s semi-detached house which they had invested in with multiple extensions and a series of internal refurbishment and renovation works. To say the family had considered each project in detail, wanting to achieve the best outcomes possible, while putting their own stamp on the property would be an understatement; the areas that had been tended too looked fantastic.

The bathrooms however, main, master en-suite, daughter’s en-suite and cloakroom needed a little TLC. Although in good working order the rooms, in particular the en-suites which this case study will focus primarily on, required a modern design and functional layout rethink, to be consistent with the rest of the home and make the most of the available space.

Mr and Mrs Cowlings master en-suite was a small space which struggled for storage making the room feel even more claustrophobic and tight than needed be.

Featuring a small D-shaped shower enclosure in the corner of the room and a relatively large wall hung basin the room was at odds with itself and needed to be taken back to basics with a focus of achieving a more minimal and modern look and feel. 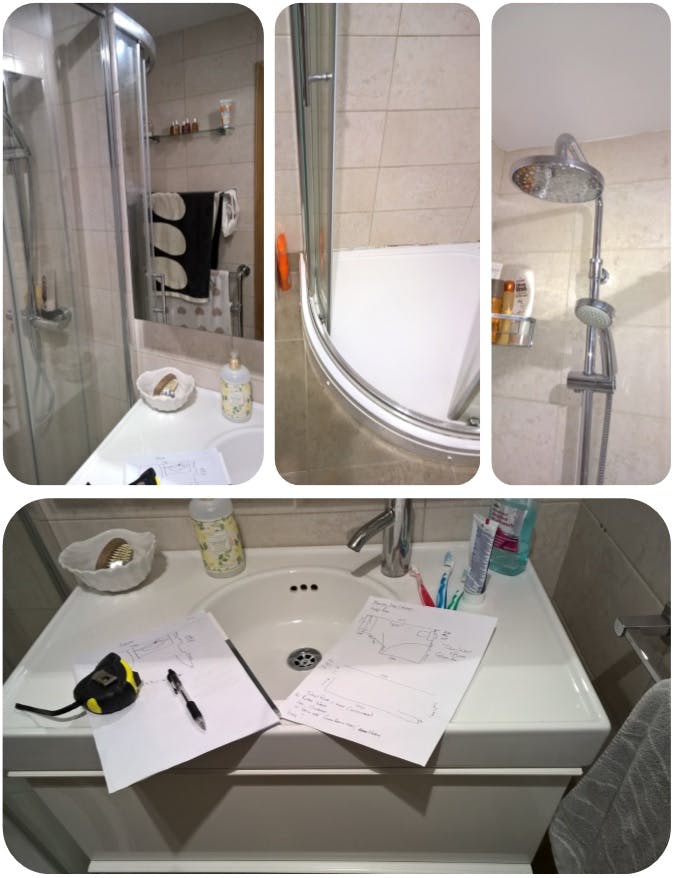 Similarly to her parent’s en-suite, Mr and Mrs Cowlings daughter’s personal showering area, was not only small but also of an awkward shape, making the renovation works even more troublesome. Consisting of a tightly fitted D-shaped shower enclosure, small vanity basin unit in the alcove and a closed couple WC the fully tiled second en-suite also needed a modern rethink, along with careful consideration towards fixtures that would complement the size and shape of the room.

Having initially visited our showroom to explore the inspirational displays in more detail Mr and Mrs Cowling were impressed with what our showroom had to offer, along with the attentiveness, help and advice given to them by Sue, as first contact. Following a detailed discussion on what they were looking to achieve and how we work as a company, the virtues of our full service offering, and the complete peace of mind that comes with it, was enough to encourage them to arrange an appointment for a designer to meet them at their property to survey the works in more detail.

Whilst on site, Garry spoke at lengths with the couple over their bathing problems, areas of concerns and any further issues and niggles they were wanting to eradicate as part of the renovation works. As mentioned earlier, space in both the en-suites was by far the biggest difficulty; which Garry was confident he would be able to combat within the design creation. Filled with confidence, Mr and Mrs Cowling, and their daughter, felt comfortable allowing Garry to present them with his own take on what both en-suites should, and needed, to achieve based on conversations had.

Achieving a classic hotel look and feel the master en-suite was stylishly fully tiled and featured a traditional wet floor concept which completely opened up the available space, providing a walk through, not dividing, modern shower area. Also including a wall hung basin which allowed for full floor exposure (a classic space enhancing design trick) the new en-suite also featured purpose built niches in the wet floor shower area which allowed for the storage of soaps, shampoos and conditioners.

Having explored all avenues with regards to changing the layout in order to make the best use of available space it became clear that the transformation of the second en-suite would come down to the selection of fixture choices alone. The awkward shape made it impossible to change things around so Garry designed a second wet floor shower en-suite with retractable curtain enclosure which would essentially make the entire room the shower area, opening it up and make it all feel like one. Featuring a fitted vanity basin unit with storage and back to wall WC, the en-suite was fully tiled in a light ditto grey which further opened up the space area making it lighter and brighter.

“100% rating from initial showroom visit to the sign off of completed installation. Both en-suites, and subsequent cloakroom, have been professionally installed by our multi-skilled fitter, Glen, whose attention to detail is second to none. It has been a pleasure to work with this company and we wish we had another room to convert!”