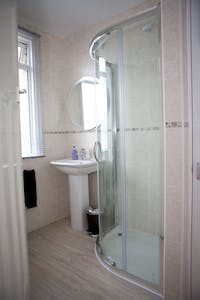 Mr & Mrs Howson had a pink bathroom suite that dated back to the 1970’s, with an old-fashioned vanity unit and a shower over the bath. The walls were partially tiled with old-style six inch tiles. These were in very poor condition, with the rest of the walls being wallpapered with tile effect paper. The ceiling was artexed, in line with fashion at the time of the original installation. Their bathroom was in desperate need of a face lift.